If memory serves me correctly Dad went on three (possibly four) pilgrimages to the Holy Land. The first was in February of 1977. He had crammed a lot into his nearly 17 years of pastoring (3.5yrs at Second Baptist Church in Mumford, NY and closing in on 13yrs at Heritage United Church of Christ [HUCC] in Baltimore, MD).

Aside from tasks associated with any pastorate, Dad was working on buying another building to house more ministries that would expand the spiritual footprint of HUCC in Baltimore; he had run an extremely successful campaign (“Crusade” he would call them) but lost the election in 1974. As a child, I did not understand how success and loss could coexist. Thank God for the wisdom that comes with age! His was running on empty. His faith needed refueling. And what better place than the Holy Land?

This journal entry was on the eve of his departure for the first pilgrimage. The reader can’t help but feel his excitement.  At the same time, though never stated, one gets the feeling that he is keenly aware this could be the last time anyone he loves will see him again or vice versa  … making “good-byes” all the more imperative and difficult.

All we knew in 1977 was that the Middle East conflict was constantly in the conflict. Moshe Dayan, Yitzhak Rabin and Anwar Sadat were names that appeared in the newspapers daily. It seemed that stories of bombings and assassinations littered the headlines.

As selfish as children can be, I remember not being nearly as worried about Dad’s safe return as I was bothered by the fact that this “pilgrimage” was going to cause him to miss my 13th birthday! I am sure mom was worried enough for the both of us but, true to her characteristic strength, she didn’t let on. She managed a sleepover with four preteen boys and it went off without a hitch … or much in the way of a thank you … so … Thanks, Mom! Oh yeah, the other highlight was a call from Dad – who just happened to be about 7,000 miles away – to wish me Happy Birthday on February 21, 1977. Thanks, Dad! 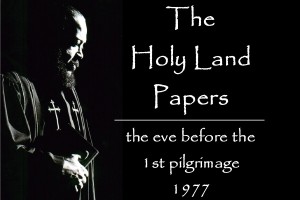 I’m really excited about my pilgrimage to the Holy Land. I’m as anxious as a five or six year old on Christmas Eve. I really get spaced out when I contemplate the thought that in a couple of days I actually will walk where Jesus walked! That is fantastic. Though I’ve been wanting to get to Africa, the Holy Land has always been my first preference. Those roots far transcend any other roots I may ever discover. The tracing of one’s roots is great if in that discovering process, one becomes more secure in his “wholeness” and therefore is able to move outside of self into others. If, on the other hand, the process sends on further into self to live, then one need not trace their roots. My pilgrimage to the Holy Land will undoubtedly send me inside self, but only that I might regroup and come out that much more together to serve. This undoubtedly will be the climax experience of my life.

It’s amazing! Thirty years ago, 1947, Dad made his pilgrimage to the Holy Land and now I go. The thought gives me peculiar vibes – good vibes however!

As I lay around the day before I left, I became acutely aware of the enormous of love my members and others have for me –I could actually feel the pulling inside when it came time for me to say “good-bye”! I really love those folk – intensely! I guess one never really knows how much others have become a part of him until one withdraws from the scene!

This is also the longest time I’ve been away from Dee and Pooh. It was hard saying goodbye. Pooh is becoming such a fantastically sensitive young man. Dee seemed much more sensitive and caring the last couple of days also.

I touched base with Chan and “J”(ane) – Mom and Dad – Al. Couldn’t locate Tread – Marie was out when I called. I’ll call her from New York City. Porter rode out to the airport with me. We’ve really gotten close since his move to Baltimore. I’ve really developed a great appreciation for Porter. It’s good to see him as happy as he is. He’s been through a helluva lot. I admire his patience and ability to deal with shit from folk who would seek to destroy him. His sensitivity to others is most unusual and seldom seen!

This pilgrimage comes at a most crucial time. I was just beginning to realize how drained I was becoming. Last year was a good but terribly draining year – a real mile marker for me. Chan’s bout with cancer took me through more changes then I’ve ever been through in my life. The thought and dealing with Chan’s death – or the great possibility of it –was scary as hell. I always had a strong desire to want to take his place. I really love that dude, as crazy as he is. It’s strange how Chan’s fight with cancer took me to the lowest part of the valley I’ve ever been -when he passed the six month death date that put me up on top of the mountain.  Everytime I see him, I just quietly thank God for intervening!

I didn’t get the chance to spend time with John and Diane (Eckholdt) as much as I wanted to! Probably it’s because I feel too deeply for them and its difficult saying “goodbye”. I’m as close to them as I am to my family – I really love them. Their love and caring for me since I’ve been to Baltimore has meant much to me and my ministry. Diane’s sensitivity and love for people – her unorthodox life style and her love for me has added great depth to my ministry and, at many times, in my most cynical moments. It’s been her insight and caring that really raised me out of my pit of cynicism. John is to me as a brother. I’d trust either of them with my life. He’s a fantastic person who has grown in his sensitivities by leaps and bounds. It’s not often that one is blessed to encounter those who are consistent in their caring. I thank God for their love!