Last week I sat in front of my television with my heart full and my eyes glistening with tears as I watched one of the Bible’s renowned stories acted out in real life. The story of the” Good Samaritan” (played by Doral Chenoweth, III) who helped the “poor man on the side of the road” (played by Ted Williams). The “poor man by the side of the road” had been “robbed, beaten and left for dead” (played by life). At that point, the story was inspiring yet in the back of my mind loomed thoughts of a developing cautionary tale that I dared not utter for fear of bringing it to life. 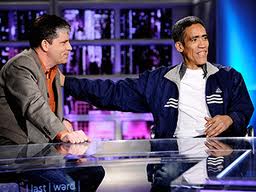 When most of us first met Ted Williams he appeared to have had more than his share of hard times. To his credit he made no excuses about his sordid past. Williams blamed nothing but his bad choices and took full responsibility for his part in his fate. Yet, in spite of nearly a 20 year downward spiral, regardless of how much fire or firewater he sucked down his throat, Ted’s “Golden” voice was spared by the One who gave us all the Golden Rule. And we all got to see it unfold. That was the good news. The bad news? We ALL got to see it unfold.

Many of us relished the opportunity to send up prayers of thanks for the fact that our lives, no matter how disappointing or frustratingly off track, hadn’t gone as far off track as Brother Williams’ had. There were others of us who held hope for humankind in our heart once again. Then came the onslaught of “opportunities” supposedly “for” Ted. I am a man of modest means but I am willing to wager when all is said and done those offering sat around a table and figured out what they stood to gain in ratings and/or publicity by engaging Mr. Williams.

Many organizations came running. Entertainment Tonight and Kraft Foods were names that Williams mentioned in the blizzard of interviews but the one that made me chuckle was the Cleveland Cavaliers. Desperate for a public relations win after the team’s owner, Dan Gilbert, talked about LeBron James “deserting” Cleveland in a manner that made me feel he thought LeBron James belonged to him, the benevolent and loving Cleveland Cavaliers offered Ted Williams a job with the organization as Announcer.

Reality hastened to the fore quickly with the timed-release introduction of Williams’ family members. The reunion with his mother, Julia, seems that it could have happened any time as they were both in Ohio. That was a flag for me. Ted Williams was long-lost to his family emotionally but not geographically. It appeared that their estrangement was rooted in years of broken dreams, promises and hearts that resulted in more of a writing off than being physically “lost”. Nevertheless, the pain and frustration of some of Williams’ family members was palpable.

On one of Ted’s television appearances with his mother she spoke of him being good hearted but “weak” and easily lead astray. She told stories of her grandchildren telling her they had seen Ted standing on the corner with a sign. Sounds like Ted had probably worn out his welcome and the only love left was the tough love that a mother employs when her heart can’t stand to be broken any more. The broken promises and fulfilled lies are life companions of an addict. Picture Samuel L. Jackson as “Gator Purify” and Ruby Dee as “Lucinda Purify” in Spike Lee’s Jungle Fever or Christian Bale’s “Dickie Eklund” and Melissa Leo’s “Alice Ward” in The Fighter. Ted Williams doesn’t appear to be anywhere near as violent or delusional as “Gator” or “Dickie” but his mother seems to be tougher than either “Lucinda” or “Alice”.

As wonderful as the Good Samaritan part of this story is there are children who had become accustomed to their father not being there who now – prayerfully – will be able to muddle through all of the hurt and anger and come out on the other side whole. There are grandchildren who may have never met their grandfather and those who have that may have never seen him sober. Trust will need to be reestablished and that is among the steepest mountains that Ted will have to climb … and it should all be done out of the public eye.

Brother Williams will need our prayers more than our adulation. He will receive many things that are beyond his ability to handle presently. Most of what he has been given has been charity which, if we are honest, does more for the giver than the receiver. Be that as it may, I am cautiously optimistic for Ted. The road to recovery is uphill, dark and bumpy but it is, indeed, with the proper assistance navigable and conquerable. May God bless Ted Williams, his family and his millions of brothers and sisters the world over.

What a Difference a Week Makes © 2011 by Wendell F. Phillips